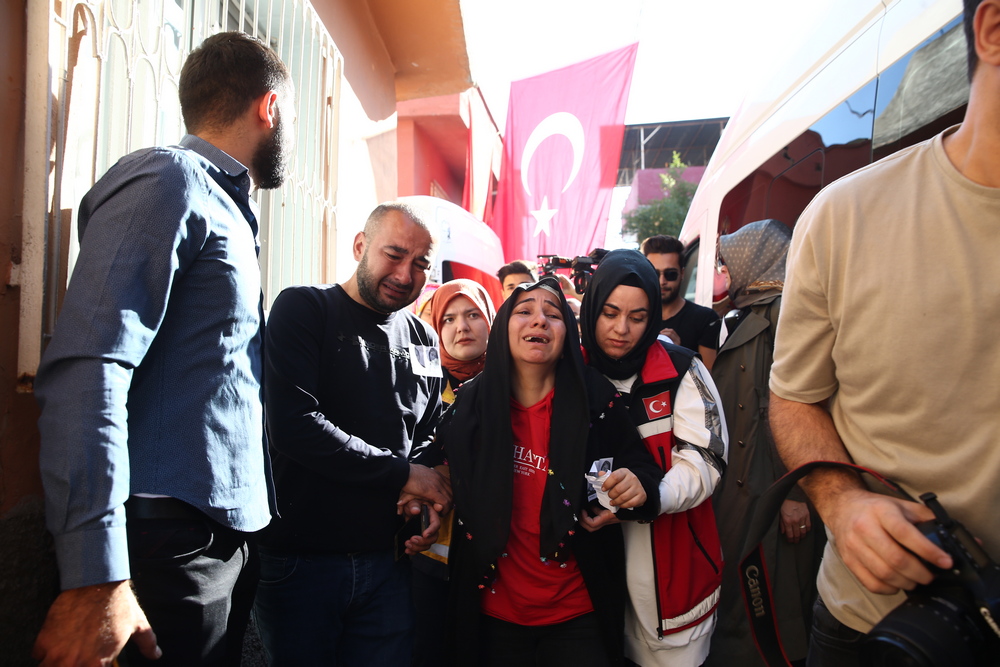 The bodies of Yusuf Meydan and his 9-year-old daughter Ecrin, who lost their lives in the terrorist attack on Istiklal Street in Istanbul's Beyoglu district, have been flown to Adana, where they will be sent on their final journey. Meydan's wife Mevlüdiye, who was injured in the same attack and was discharged after treatment, shed tears. Photo: Ozan Efeoglu, Anadolu Agency

Turkey: What Lies Behind the Attack in Istanbul

PressOne correspondent Carolina Drüten writes from Ankara about the first echoes of yesterday’s attack in Istanbul, which killed six people and injured more than 80.

Terror is back in Istanbul. On videos on the web, a loud bang can be heard, followed by a fireball. The footage shows a black crater and people lying on the ground. At least six people died and more than 80 were injured in the Sunday afternoon explosion on a popular shopping street in the Turkish metropolis. Some of them are still being treated in hospitals at these hours.

Shortly after the event, Turkey’s interior minister announced that the Kurdish group PKK was responsible for the attack. The person who planted the bomb had been arrested, Süleyman Soylu said. Earlier, government officials had spoken of a suspicious woman who had been sitting on a bench in the shopping street for three quarters of an hour and stood up shortly before the detonation.

In response, the PKK denied any involvement and conveyed that the group „does not directly target civilians” in its conflict with Turkey.

The PKK is listed as a terrorist organisation in Turkey as well as the EU and the U.S., and maintains positions in Southeastern Turkey and Northern Iraq. It has been fighting the Turkish state since the 1980s. The conflict has so far cost tens of thousands of lives. Under the current president, Recep Tayyip Erdogan, a peace process was initiated in the meantime, but it failed in 2015 – followed by a wave of violence.

The fact that the Turkish government is now blaming the Kurdish militia for the attack is explosive from a foreign policy perspective on two levels at once: NATO’s expansion to the north and the situation in northern Syria.

First, the PKK is at the center of a debate between Turkey and Sweden and Finland. In May, the Nordic countries had submitted a request to join NATO in connection with Russia’s war against Ukraine. Turkey remains the only country to block Sweden and Finland’s membership in the defence alliance.

Ankara cites these countries’ support for Kurdish terrorist groups as the reason. Sweden in particular is at the center of this criticism. PKK flags are repeatedly seen at demonstrations there, which many people in Turkey see as an affront.

Fahrettin Altun, Turkey’s communications director, wrote on Twitter Monday morning, „Terror attacks against our civilians are direct and indirect consequences of some countries’ support for terror groups.” Those countries must immediately stop these activities if they „want Turkey’s friendship,” Altun said.

He did not mention any countries by name, but his message is likely to have been registered very carefully in Sweden. The new head of government, Ulf Kristersson, had traveled to Turkey just last week to secure Erdogan’s approval for NATO membership – so far unsuccessfully.

In Ankara’s view, the steps taken by Stockholm and Helsinki against terrorist activities in their countries were not yet sufficient. Hopes that the Nordic countries could be included in the defence alliance by the end of the year look less and less realistic.

Second, the Turkish government’s conclusions link the attack to the situation in northern Syria. Interior Minister Soylu said there are indications that the order for the attack came from Kobane. This is the capital of the northern Syrian district of Ain al-Arab, lies just south of the Turkish border and is mainly inhabited by Kurds. According to an Istanbul police statement, the person arrested in connection with the blast reportedly testified to having been trained by Kurdish militias and to having come to Turkey from Syria to carry out the attack.

Ankara considers Kurdish groups active in northern Syria to be offshoots of the PKK – such as the Syrian Kurdish party PYD and its military arm YPG. For a long time, Erdogan has therefore wanted to create a 30-kilometer-wide so-called ”security” zone to push these groups back from the border with Turkey. Such a strip could also be used to settle Syrian refugees, who are increasingly unwelcome in Turkey.

Erdogan last threatened a new military operation in May. At the time, he named three places that could be targeted in a new offensive – including Kobane. So far, however, his words have not been followed by ground troops.

The issue repeatedly causes conflict between the United States and Turkey. Washington had cooperated in the fight against IS with Kurdish groups, which Ankara considers terrorist organisations. Shortly after the attack in Istanbul, Interior Minister Soylu criticised the U.S. government’s attitude toward the Kurdish groups. He criticised the „insincerity (…) of our so-called allies”. He compared expressions of sympathy from the U.S. to a „murderer who is one of the first to arrive on the scene.”

The deadly blast in Istanbul sent shock waves through Turkish society, for which such high-profile terrorist attacks had not been a major concern for several years. Most recently, Turkey, and Istanbul in particular, had been the target of a bloody series of attacks in 2015 and 2016, for which the Islamic State (IS) terror militia and Kurdish militants were predominantly blamed. One of the attacks took place on Istiklal Street. The shopping street in the heart of Istanbul was also the scene of yesterday’s Sunday attack.